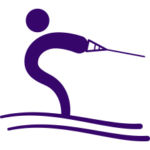 Water Skiing turns 97 this year. Ralph Samuelson, who experimented with it in the summer of 1922 at Lake Pepin, Minnesota, USA, is considered the “father” of the sport.

Over the years, water skiing techniques have evolved, styles have been perfected, new events have been added and international competitions have been held, especially since the 1970s. Water Skiing was included as a demonstration sport at the 1972 Olympics in Munich, but due to the high ripple in Kiel port the test was not satisfactory and the sport missed the opportunity to be part of the program.

Slalom, Tricks and Wakeboard are the three Water Skiing events.

In the first event, the athletes try to pass through six balls to the right and left of the craft.

In the second event there are some tricks and the athletes are rated according to the difficulty level of their efforts.

In the third event athletes attempt to jump as far as possible by passing over a diving board.

In Greece, the sport was recognized in 1963 by the General Secretariat of Sports, thanks to the late Epaminondas PETRALIAS, who was from Patras and was one of the founding members of the Patras Nautical Club and a flagship figure of Greek sport.

The same year the Hellenic Skiing Federation was founded. Athanasios DIAKAKIS was the first president of Vouliagmeni Nautical Club, and the first Hellenic Games were organized at the NOV venue. Vouliagmeni Nautical Club has always been the dominant club in Greece, representing Greece internationally since 1959, while the United States, Canada, Sweden, South Korea, Great Britain, Australia and New Zealand have traditionally been leading world forces in the sport. In 2015, in the first Mediterranean Beach Games in Pescara in Italy, the host country was the leading force, winning four of the 6 gold medals, and France winning the other two.