THE CITY OF PATRAS

Patras – Capital of the region of Western Greece

Patras is the capital city of western Greece and the third largest city in Greece.

Patras is the administrative centre of the Region of Western Greece and the economic, cultural, educational, trade and population centre of this region.

Patras in one of the most historically important places of Greece and it is located at the centre of a virtual triangle that is shaped by the 3 most significant archaeological sites in the country: Ancient Olympia, Delphi and Epidaurus (Patras is less than 2 hours from all of these sites).

The plethora of archaeological sites and historical monuments, most of which date back to the Mycenaean period, are proof of the outstanding role of Patras in the development of the ancient Greek civilisation. 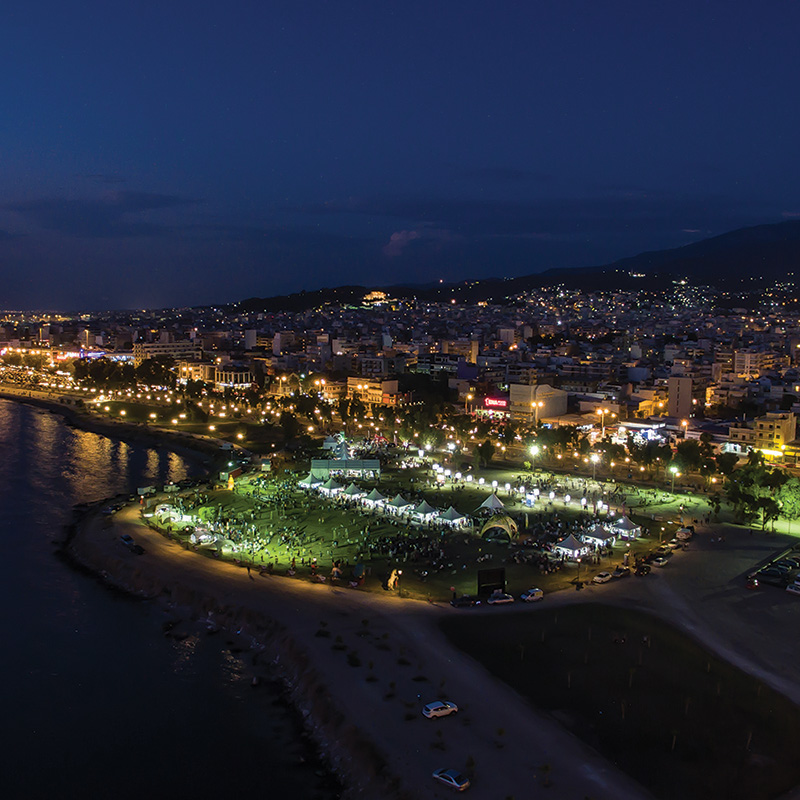 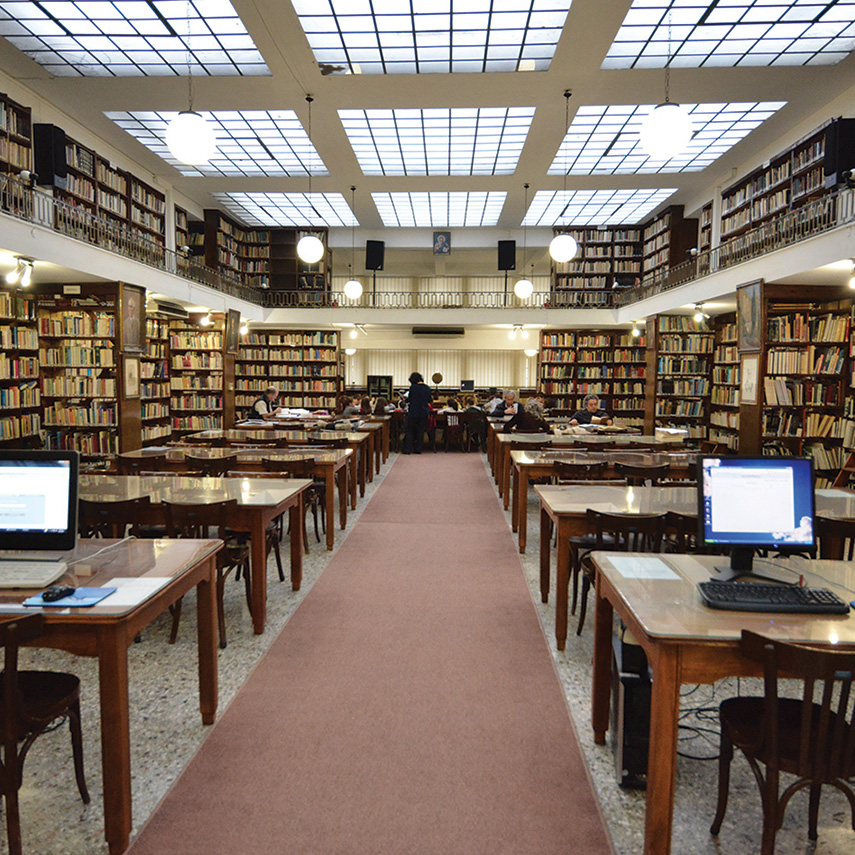 More than 40,000 students reside in Patras giving it great vibrancy.

Patras is one of the most important centres for education and research in Greece. The University of Patras is the third largest educational institution in the country in terms of the number of departments, professors, students and administrativestaff.

The University of Patras has research centres and institutes which produce internationally acknowledge scientific work.

The Environment above all

Atmospheric pollution is unheard of in Patras, where the atmosphere is clear and the environment is fully protected.

The city preserves its natural beauty and green spaces dominate. The local authorities have taken action for the protection of the environment at all levels. The beaches of Patras are some of the cleanest in Greece and have been awarded “Blue Flags”.

The weather conditions are typical of the Mediterranean with sunny summers and mild winters.

Gastronomy and accommodation in the city are of high standards. Patras has a lot of 4 and 3 star hotels along with many traditional tavernas and restaurants which serve genuine Greek and Mediterranean cuisine. 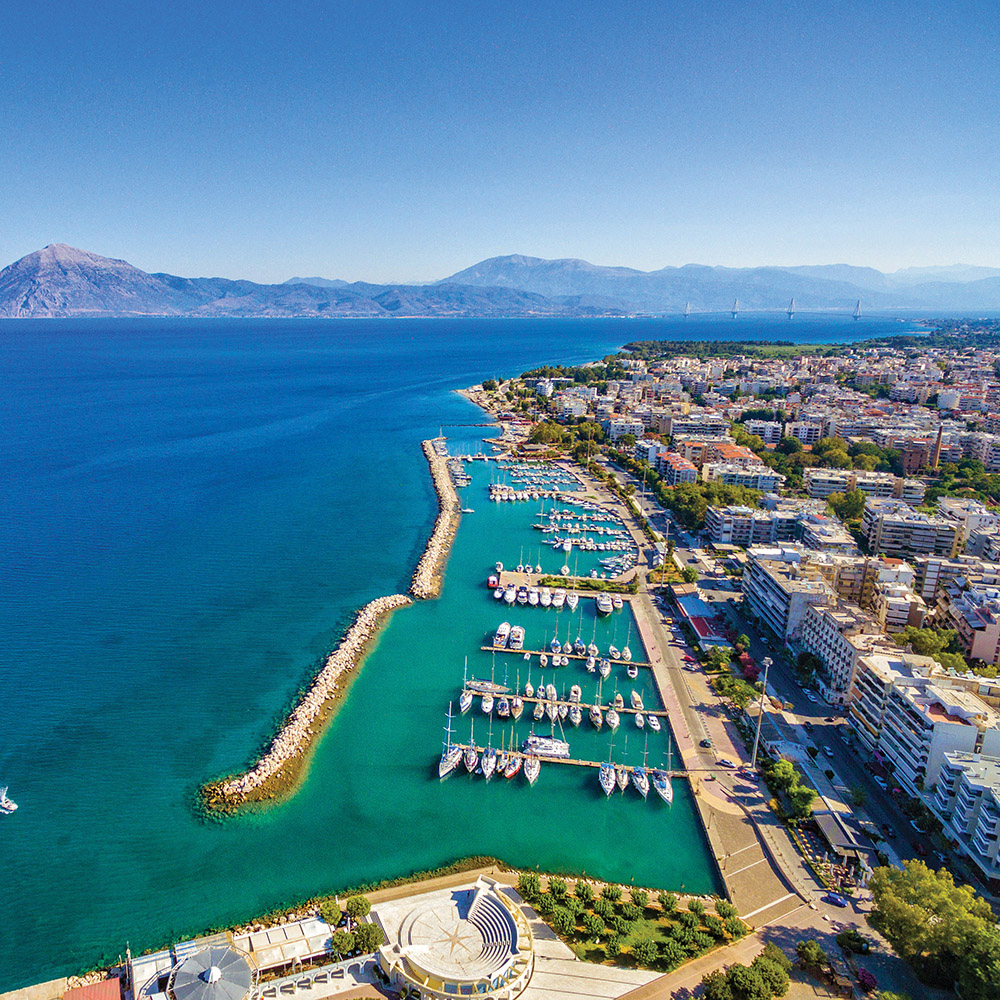 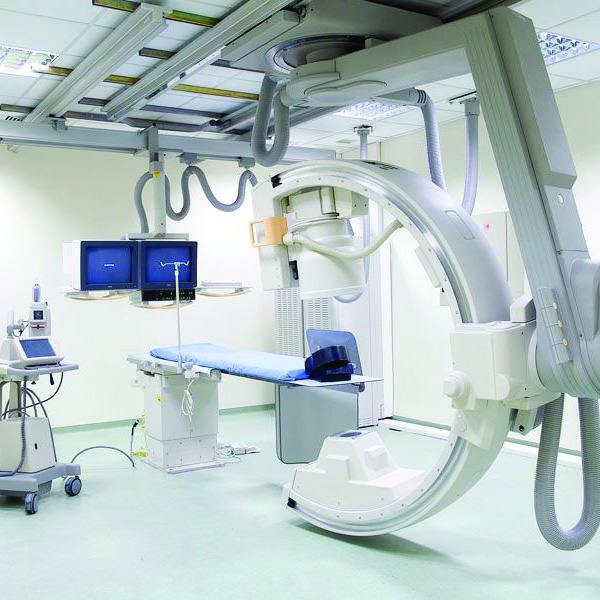 Patras has a comprehensive network of health services, the Regional University Hospital is one of the most technologically advanced hospitals in the Eastern Mediterranean and specialises in all fields of Medicine, the Doctors and Nurses are highly trained medical professionals.

Patras is an absolutely safe city with a low crime rate.

Due to its geographical location Patras is a basic hub of transportation. It is recognised as the gateway from Greece to the West because of its port that connects it to the rest of Europe.

Those two axes connect to one of the national , regional and local features , world’s longest multi-span cable-stayed bridges (3 km long). The Rio-Antirrio Bridge is a landmark for the city and the region.

30 km away from the airport of Araxos that services chartered flights while the main airport that services the city is the “Eleftherios Venizelos” airport in Athens at a distance of 218 km (the duration of the trip is 2 hours by means of the modern motorway “Olympia Odos (Road)” whose construction was completed in June 2017. 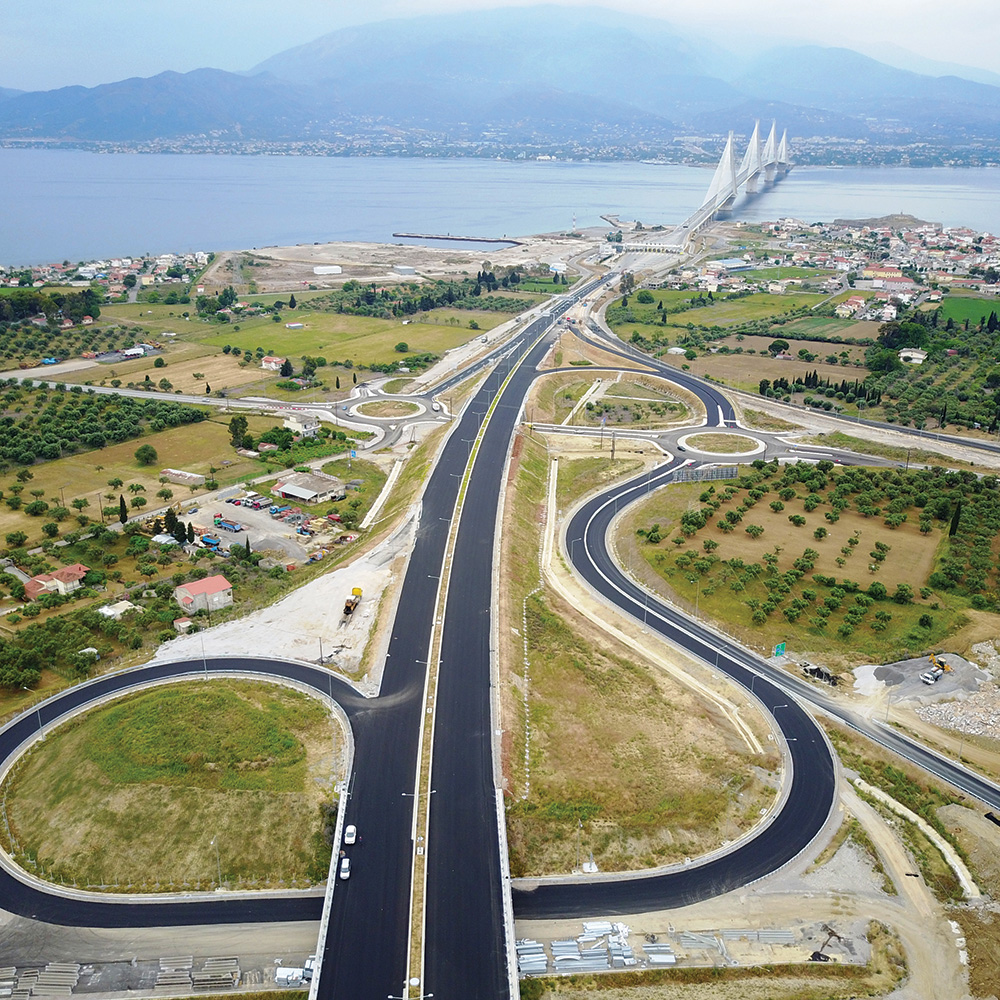 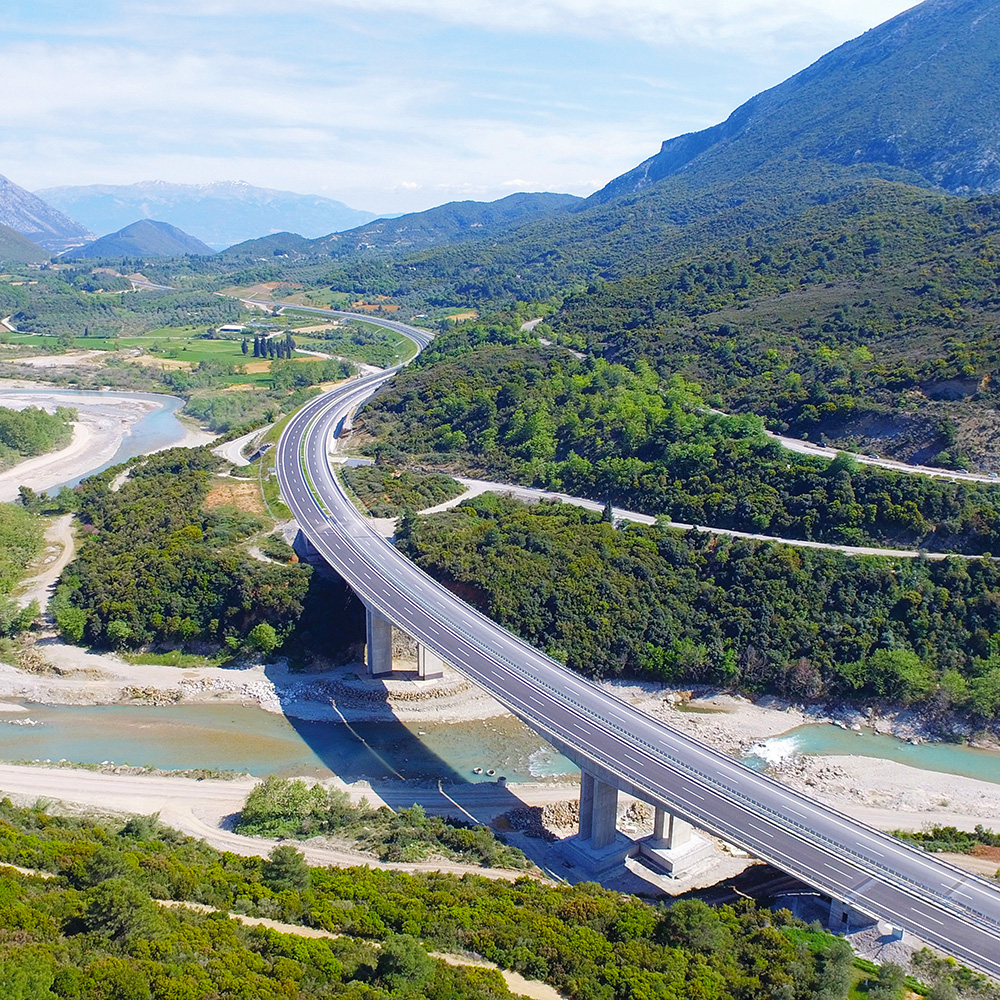 Patras has a high standard of technology related to managing communication and its systems. It also has a global known University which handles complex matters of digital technology.

Patras has a comprehensive range of services for the convenience of its residents and the visitors. The Local Authorities have strived to create a network which provides all the necessary information regarding transport and the pleasant stay for the visitors.

There are branches of all banks, offices of Central and Local Authorities that meet all the needs of the citizens.

Patras holds a leading position in the development of the ancient Greek civilisation. From the clues discovered so far it is obvious that Patras was inhabited for the first time in 3000 BC. Patras began to flourish during the Post-Hellenistic or Mycenaean period (1580 – 1100 BC).

The city was founded by the Archaens of Sparta who were led by Prevgenis and his son Patreas and arrived in the city following the Dorian invasion of the Peloponnese.

Patras had a period of prosperity again in the mid-9th century BC due to the production and processing of silk.

History in Achaia is imprinted on the beautiful monuments of ancient Greek, Roman, Byzantine and contemporary civilization, many of which have been preserved to this day. 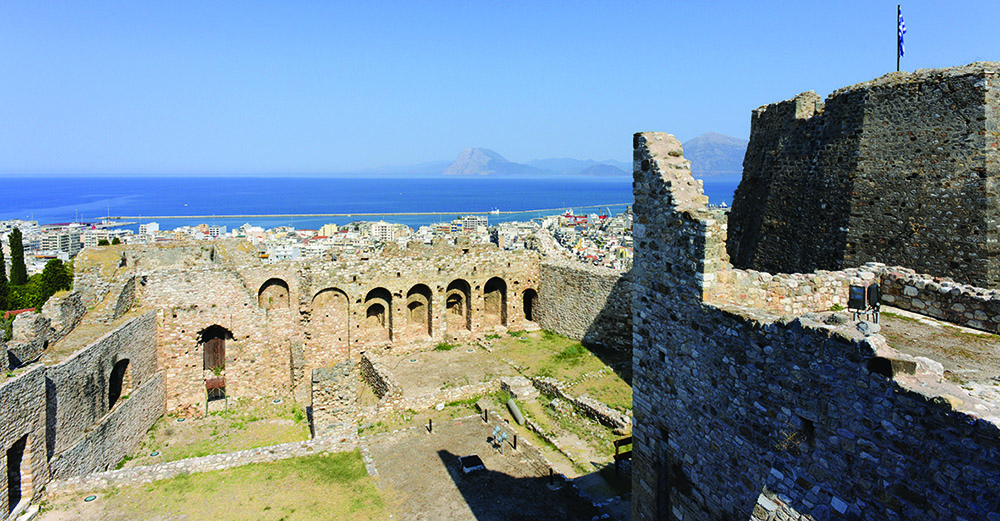 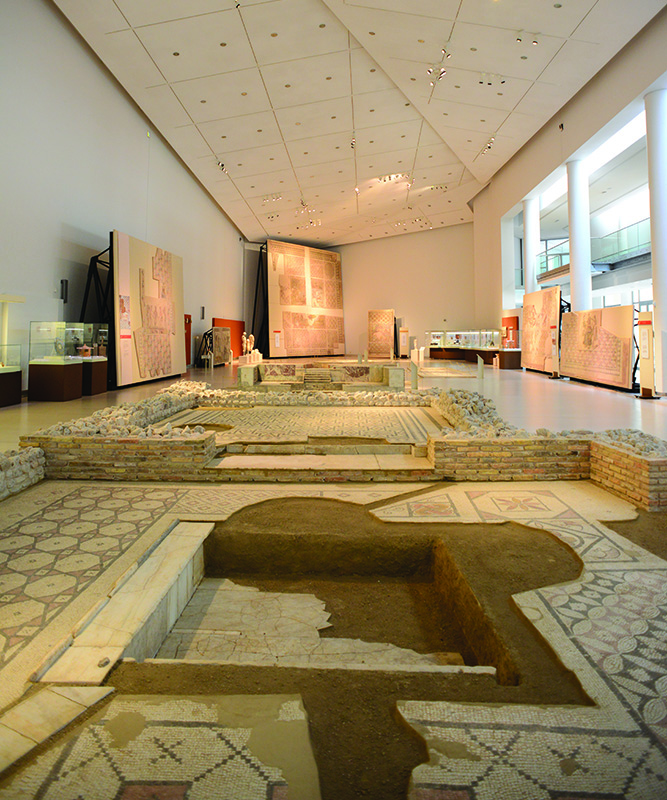 Patras has a long tradition in Sports and Beach Sports, it has got Teams organized into National Leagues in many sports including Football, Basketball, Volleyball, Handball, Water Polo, Swimming, Athletics, and Sailing.

In fact there are 154 Sports Clubs in Patras encompassing numerous sports.

Lots of athletes from Patras have won National and International titles.

Patras has a long tradition in Beach Sports and its Teams have won a lot of titles. The first swimming and water polo Team the Nautical Club of Patras (NOP) was founded in 1929 and in 1932 it had 154 athletes.

Today in Patras the following Beach Sports have 32 Clubs in Patras.

Furthermore, the people of Patras love Sports and attend the city’s sporting venues in great numbers.

During the last 3 decades, Patras with its impressive sporting facilities and with supporting infrastructure has organized significant sporting events, at global, European and national levels.

Foremost of these events, in August 2004 the men and women’s Olympic Football Tournament was held in Patras.

The International Olympic Committee, Mr Sepp Blatter the President of FIFA and the Leaders of the Olympic Delegations who were hosted by the city and warmly congratulated us on our flawless organisation, the comprehensive sporting facilities and infrastructure. In national , regional and local features , addition they were impressed by the “Pampeloponnisiako Stadium” where the football matches took place and the great attendance figures. The city’s experience in organising sports events is indisputable and supported by the fact that many international federations of several sports choose Patras for their events.

A place of Culture

In Patras the cultural life and creativeness are visible everywhere.

The Carnival of Patras is famous all over Europe. It is a celebration that lasts approximately two months during winter and more than 50,000 citizens, mainly the younger generation participate. It’s a celebration of cultural creativity, enjoyment and volunteering that is based on individual contribution and participation.

The international Festival of Patras with many global celebrities (including Bob Dylan to Joan Baez) as well as the Ancient Drama Festival that bring the most celebrated performances from Epidaurus and Odeon of Herodes Atticus to Patras, attract an audience of thousands everysummer.

Patras is a “City of Theatre” with a drama school, municipal and regional theatre, more than 10 theatrical venues and dozens of amateur drama groups.

The Dance Troupe of the Municipality of Patras with 1400 adults and more than 700 children is one of the most acknowledged dance troupes in Greece.

The Cinema Club one of the oldest and most active in the country apart from the showings it organises, it annually broadcasts the Metropolitan Opera of New York. In addition, dozens of music groups continually enliven Patras with all varieties of concerts, foremost amongst these being the chamber orchestra “The Orchestra of Patras” and the “String Orchestra”.

In the Municipal Art Gallery as well as the private galleries around the city, local and international works of art are exhibited, while the “ReCulture” International Art Festival, focuses on contemporary creations with plenty of events every year.

The cultural heart of Patras beats in the New Archaeological Museum an amazing museum with fabulous futuristic aesthetics, one of the most modern in Greece which houses fascinating permanent exhibits and hosts diverse short-term events regularly.

During the full moon of August it remains open after midnight for concerts and other events with free admission.

During that year great events were organized such as, the “Leonardo Da Vinci; scientist, inventor, artist” exhibition, the theatrical performance of Dante’s ”Divine Comedy” by the Oscar award winning Roberto Benigni, the literature event where Nobel winning writer José Saramago was present, the Eros Ramazzotti concert and much more. In 2006 Patras used one common language: The Language of Culture.