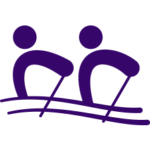 Rowing Beach Sprint is in some ways a more extreme version of classical Rowing due to the elements of adventure and the difficult conditions involved.

The races are held in the open seas and therefore the crafts used are wider and more powerful than those used in rivers and lakes.

Rowing Beach Sprint first appeared on the scene in 2006 and within a few years it spread widely around the world and gained popularity in several countries, with Italy, France and Great Britain playing a leading role.

In recent years it has been growing continuously and has made its presence felt in Africa and in the Maldives.

In Greece the sport appeared in 2012 at the initiative of Rowing champion Nikos GOUDOULAS, who introduced it and made it known to the Thessaloniki-based club “Omilos Filon Thalassis” (Friends of the Sea). How did he get hooked on it? “In 2010 we went with my brother, Apostolos GOUDOULAS to New Zealand to compete in the World Championships. In Dubai, our stopover, we met a group of Australian women and we were told they were back from the Rowing Beach Sprint World Championships. That’s when we started to cultivate the idea and to realize our goal after the end of the 2012 Olympic Games.

Apart from the skills and physical condition required, Rowing Beach Sprint athletes must possess good orientation skills, know how to apply the principles of safety at sea, know how to run in the sand, how to get on the craft, how to jump off it and so on.

The sport includes seven categories with the crews of the crafts being single, double and quadruple.