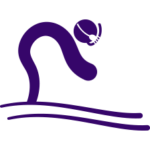 The roots of the sport are lost over time and have to do with human need and the inevitable contact with the element of water.

The first official events date back to 1936 and were recorded in Padouise, France. Until 1960 there were competitions in lakes, rivers and swimming pools similar in style to classical Swimming, except that athletes wore fins.

Gradually the sport began to develop at a faster pace. In 1967 the first double-fins appeared and the development was mainly observed in countries of central Europe and in the former Soviet Union. That’s when the first European Games were held. In 1969, all the classic Finswimming distances from 100 to 1500 meters and the 1852-nautical mile were established.

In 1970 the first fiberglass single-fins were manufactured and swimmers could now reach speeds of up to 12 kilometers per hour. 1972 is considered a milestone in the history of the sport because with the use of the single-fins a new technique was created that resembles dolphins in the water. With the passage of time and as the sport spread rapidly, European and World Championships were established and accessories were constantly being improved. In 1986 the International Olympic Committee (IOC) recognized the sport through the World Underwater Federation (C.M.A.S.), which was invited to present it on June 7th, 1997, at the Mediterranean Games in Bari.

From January 9th-11th, 1959, representatives of federations from Germany, Belgium, Brazil, France, Greece, Italy, Monaco, Portugal, Switzerland, the USA and Yugoslavia met in Brussels in Brussels and created the World Underwater Federation (Confederation Mondiale des Activites Subaquatiques). Finswimming is amongst the 9 sports included in this.

In 2004, Finswimming came close to being part of the official program of the Olympic Games. Eventually, this was not achieved and it is still remains a great desire of the people of the sport.

In Greece, Finswimming has been officially in existence since 1952 with the establishment of the Hellenic Federation (EOYDDAATK). In 1964 the first Hellenic Championship was held, and in 1980 the sport was integrated by the Swimming Federation (KOE).

Russia, China and Korea are considered the world superpowers in the sport, while Italy, France and Greece dominate in Europe.